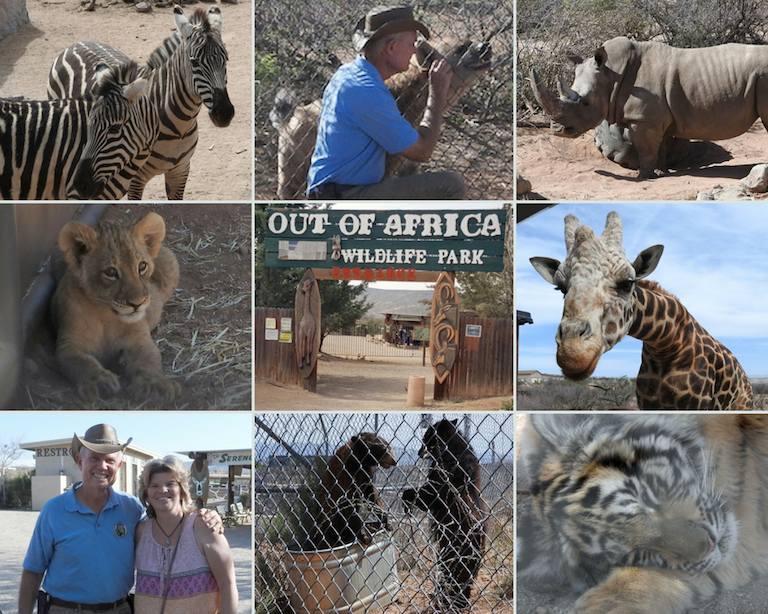 A few days ago, I went with my friend Trinity, who is an intuitive, medium, and Theta Healer, to the Out of Africa WildLife Park in Camp Verde, Arizona. My intention was to connect with and talk with some of the animals there. I manifested exactly what I had put out to the Universe. Trinity and I set out about 9:45 am in the morning to go to the park. I was feeling excited and happy that I was going to talk with the animals that were there. As we were driving there, I thought, “Wouldn’t it be cool if we could meet the owner of the park.” Little did I know, I would manifest that experience also.

First thing when we arrived at the park, we boarded the tour bus that would take us on the African Bush Safari to see giraffes, zebras, sable antelope, gemsbok, ostriches, and so many more exotic animals. While Trinity took photos, I fed one of the giraffe acacia leaves and got to see some of the staff working with, Kibo, another of the giraffes. They were working on getting him used to being touched and rubbed on his face and his neck, in order to eventually be able to trim his hooves. The bus stopped and we watched one of the Ostriches do a mating dance because he loves people and had to show us how much.

We finished with the reptiles and decided to leave, so we started to walk down the road towards the exit. As we were walking, this gentleman who works at the park pulls up to us in a maroon Polaris. It looks like a cool, off-road version of a golf cart, and he says to us, “Hey, there are two lions on the loose, if you see them….” I thought to myself, “This guy is joking with us, because if it was true, I would feel more of an urgency to run.” So we start talking with him and I tell him that I have been talking with the animals and he asks me to tell him what they have been saying. So I am telling him what some of them told me, describing their personalities, what they want more of, etc and he invites us to get in the Polaris. The minute I sat next to him, I said, “You aren’t the owner are you?” He said in a low voice, “Don’t tell anyone.” He introduced himself and said, Hi, I’m Dean.” I laughed! Dean and Prayeri Harrison founded Out of Africa Wildlife Park in 1988. He said, “Do you mind talking with Kibo, our giraffe? We have been training him to get used humans petting him, but eventually, we want to trim his hooves.” I jumped at the chance and said, “Yes! I would love to!” After I talked with Kibo and Trinity sent him some energy healing on him, we were off to talk with some more of the animals. The next animal we went to see was Jericho, the White Rhino. We got close enough to pet him and give him some Reiki and Theta Healing for his headaches. Jericho had a history of Encephalitis and still suffers occasionally. He felt like a big puppy dog that wanted to climb in our laps. He has a very calming energy. By the time we were done talking with him and giving him healing, he was much more relaxed than when we first arrived at his area. Trinity and I ended up talking with Ted, the African Lion; Chipa and Chitabe, the Spotted Hyenas; Silhouette, the black leopard, who would like a name change to Sapphire; Lemurs; a few of the Tigers, and last but not least, the male and female King Cobras.

Most of the animals that we talked with told us they were well cared for and liked living at the park because they know that their purpose is to educate people about themselves. Some wouldn’t be alive today without having the park as a home. I enjoyed every minute spent learning about the history of the park, meeting some of the staff and talking with my new animal friends. I look forward to my next visit with these animals. Sign up now and get your FREE Animal Communication Tip Sheet delivered to your inbox.